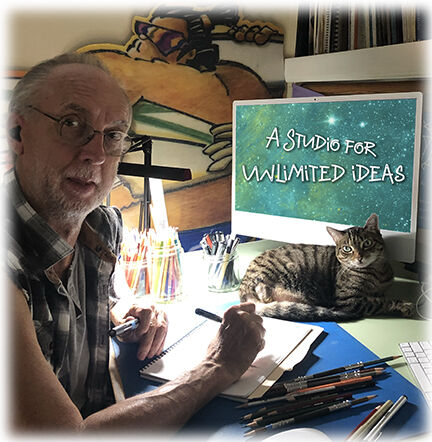 Starting his drawing career at the age of 5 in front of the TV with a box of crayons and a bowl of cereal, now 40 years later, this freelance illustrator, cartoonist and writer continues his  “wizardry” from his strangely fertile mind. Paul creates wildly, unique and colorful caricatures, cartoons and illustrations with his blend of lightness and a slightly ‘bent’ style that one will always remember.

His characters and designs have appeared in books, magazines, syndication, and retail products.  A Journalism major with an art minor in college he won awards as an editorial cartoonist in college. His first published work appeared in Coaching Young Athletes – (Human Kinetics Press) and was the co-author and artist for a nationally syndicated and Reuben nominated feature called “Strictly Classified” with The Chicago Tribune syndicate.  He worked with the San Francisco’s Cartoon Art Museum, San Francisco City College, the Half Moon Bay and Kauai, Hawaii continuing education program – where he taught the art of cartooning both to adults and to children.

After moving to the island of Kauai in 2005, Paul continued his ‘other’ teaching career as one of the island’s long-standing  hatha yoga instructors.  He was the yoga editor and an artist for Hawaii’s Inspiration Magazine, as well as providing graphic and copywriting support for Emagine Web Marketing, one of Kauai’s web design/marketing companies.

We are all Unlimited Ideas

Paul maintains a weekly Inspirational blog filled with his poetry, writings, artwork and other inspirations that have come to him through a variety of sources. Product ‘galleries’ also display his cartoon and illustration work and the Blurb website is home for his book projects.

Le Guru is You!

His philosophy is rooted in the knowledge that we are all Unlimited Ideas and that the truly effective teachers are our ‘gurus’ within….“Life is a weaving of similarities and the unexpected. We ride a wave of … possibilities. We are able to grow and listen more effectively when we don’t get too comfortable with patterns.”

Cartoons and caricatures are an effective fun way to help express and aid the customer in remembering your concept and/or message. If you are looking for help in creating that special character or cartoon for your publication or advertisement give A Studio for Unlimited Ideas a call 650-773-3422 or email and let’s set up some time to talk about what you need and what we can create together!!